The Story of Ham Snead 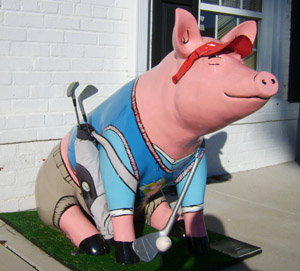 Hammy (as his close friends call him) was born deep in the woods of North Carolina, in the shadow of Snout Pilot. He learned to play the game of golf by hitting hickory nuts with old tree branches. As his talents grew, along with his appetite, Hammy knew that his future was to play on the PPGA (Professional Pig's Golf Association) Tour. Life was tough on the tour as Hammy had to hoof it around the country, staying in cheap sties and barns, trying to follow his dream. Along the way he did get to play in some of the tour's most prestigious events, The Hogsters, The PPGA Championship, and once Hammy even traveled to Scotland to compete in the oldest golf tournament in the world, The Piggish Open.

But fame and fortune was not to be found until Hammy entered The Greater Greens-boar-o Classic. The weather was horrible, as was usually the case, and the rain did not stop. After days of wallowing through the mud and fairways of Greens-boar-o, Hammy came to the final hole tied for the lead with the great Porky Oliver. The event was a real pigs-knuckle biter. The tournament came down to the last putt. While Porky chopped his effort, Hammy calmly curled his putt in for the win. The crowd squealed in delight for their new local hero.

Hammy played for a few more years and was able to get in some famous events like The Bacon Hope Desert Classic, the Hammy Davis-Junior Pro - Celebrity as well as the Bing Hogsby Charity Golf Tournament. Soon after though, Hammy knew it was time to settle down and raise a litter. He married his long time sweat-heart Sarah Sowers and moved to Lexington. Using his golfing knowledge, Hammy became one of the best golf instructors on the links. His great reputation brought many other pigs to the City to meet and visit him; many of them never leaving. Hammy has since retired but still roots around the local courses and gives the occasional tip to an up and coming piglet.